EIMA 2022 emerges as a huge success

The 2022 edition of EIMA International reached its highest ever result, with a total visitor count of 327,100 which exceeded the previously held pre-pandemic record of 317,000 in 2018 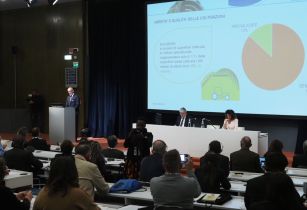 The success of EIMA confirms the growing interest in new-generation agricultural technologies to meet the food needs of a global population. (Image source: EIMA)

During the five days of the Bologna exhibition organised by FederUnacoma, foreign visitors, from every continent accounted for 18% of the total attendance and 80 official delegations of economic operators animated business meetings in the Foreign Delegations Pavilion that was specially set up.

The Bologna exhibition thus overcame the most critical two-year period for trade exhibition events (2020-2022), brought about first by the health emergency and then by the difficult economic situation, and strengthened its leadership in the trade exhibition landscape.

"The success of EIMA confirms the growing interest in new-generation agricultural technologies to meet the food needs of a global population that will grow by almost a billion within the next ten years and confirms how in every region of the world, work is being done to innovate cultivation methods, seeking to make scientific and sustainable use of water resources and soil fertility," declared FederUnacoma president, Alessandro Malavolti. "In this perspective, a trade exhibition like EIMA has an important mission also for the years to come," he added.

"The result of this edition is the result of a very rigorous monitoring that we carry out as a Federation, trying to offer manufacturers and the trade public increasingly efficient trade exhibition services and it is also the result of the substantial investments we have made to promote the exhibition and to involve all strategic targets," stated FederUnacoma general manager, Simona Rapastella. "Additional investments were made by BolognaFiere to improve the structures of the exhibition centre which will continue in the coming years in step with a show that has a great present and a great future," concluded Rapastella.

The next edition of EIMA International is scheduled to take place from 6-10 November 2024. Another major event for agricultural machinery will also take place next year, with the return of Agrilevante by EIMA. This exhibition specifically dedicated to mechanisation for crops in the Mediterranean area, will be held at the Bari exhibition centre from 5-8 October 2023.