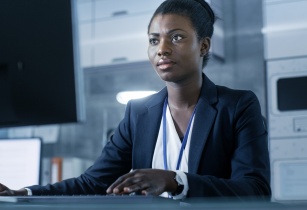 Each year, 20 African women researchers are rewarded for the excellence of their scientific work. (Image source: Adobe Stock)

Each year, 20 African women researchers are rewarded for the excellence of their scientific work. For this 2022 edition, the following three Kenyan women were among the laureates who embodied, through their career paths and research topics, all the diversity and potential of science on the continent:

1. Julliet Kirui, a Kenyan PhD student in physical sciences, was selected for her work on ‘Water quality classification using Ensemble learning and IOT’.

2. Geraldin Lengai, a Kenyan post-doctoral fellow in life and environmental sciences, was selected for her work on ‘Spices as fungicides for late blight management’.

3. Ruth Mwangi, a Kenyan PhD student in Life and Environmental Sciences, was selected for her work on ‘Biopesticides against the degradation of post-harvest tomatoes’.

In the past few years, the world in general, and Africa in particular, have been challenged by successive crises. As a consequence, instability threatens more and more countries in Africa. To address these various challenges, more than ever, the world needs science. And science needs women. Through the 13th edition of the programme, the Fondation L'Oréal and UNESCO reaffirm their commitment to women in science.

The 20 scientists awarded are working in a wide range of research fields which include: securing and increasing agricultural harvests to combat poverty and hunger, halting the spread of diseases such as malaria, improving the management and conservation of vital natural resources, enhancing the safety of their nations in the face of natural disasters, and developing diverse biopolymers for industry. Through their commitment and scientific excellence, these young women constitute a decisive asset for the continent’s development.

Selected for their scientific excellence among 425 applications by a jury chaired by Aggrey Ambali, director of Technical Cooperation and Programme Financing at the African Union Development Agency, AUDA-NEPAD, the 2022 Young Talents make the 16 countries from which they come proud. For the first time, Niger, Togo, and Chad are represented this year. They will be celebrated and honored at the upcoming Awards Ceremony in Abidjan, Ivory Coast, on December 1st 2022.

Each of the laureates have had to combine perseverance and determination while going through a journey paved with obstacles that are inherent to the world of scientific research in Sub-Saharan Africa, such as the lack of financial and technical resources. Other obstacles are specific to being a woman in science: gender discrimination and stereotypes, lack of female role models or support, and a challenging balance between professional and personal life.

"Without women, no progress is possible. We cannot move forward if half of humanity is left behind. We must encourage women, make them visible, empower them to fight against existing obstacles and allow them to inspire future generations," said Alexandra Palt, executive director of the Fondation L'Oréal, at the 2022 Education Transformation Summit at the United Nations headquarters.

The 20 awarded researchers will receive financial support to help them conduct their research project. Moreover, the programme also offers participants an opportunity to receive comprehensive leadership training, the purpose of which is to contribute to the personal and professional development of the Young Talents and enable them to break the glass ceiling, becoming new female role models in science.

In December 2022, the 20 Talents will join the community of 181 female researchers who have been supported and honored by the ‘For Women in Science Young Talents Programme’ in Sub-Saharan Africa since its launch in 2010.